Watch some of the best players test their skills in the SMASH! Store Showdown! We will be streaming them on a big screen too so everyone can watch! You can also join our various tournaments on the weekend and win cool prizes. New to to card games or want to find out more? Come down and visit the TCG Area for a demo session! Our friendly team will be happy to teach people of all skill levels!

Watch your local champions play it out in the SMASH! Store Showdown! In our original Modified 2 Deck format, representatives from each store will fight to claim supremacy! Who will be victorious and bring home glory to their store? Join our tournaments in participating stores to win a weekend pass to SMASH and an invite to the finals!

*Winners are eligible for 1 invite. Additional invites will be passed down to the next ranked player in the tournament. Special thanks to all participating stores for holding the tournaments.

Decklist is required for entry, please refer to the Vanguard Deck Registration sheet.

What is modified 2 deck format?

This is not allowed.

What is Modified best of 3?

Players will play their best of 3 games as follows:

Players will need 2 wins to proceed to the next stage. If one player has won both of the first 2 games, a third game will not be played.

If a player fails to appear at his/her seat within 5 minutes of the beginning of the round, that player will be given a game loss.

Show the love for your series and join the Weiss Schwarz tournament at SMASH! First place wins a box and there are also lots of other prizes to be won! Both English and Japanese decks are welcome.

Players will be given 10 minutes to finish 3 extra turns. After 10 minutes, the game will be decided by sudden death (after a change in either player’s damage, the player on lower damage wins the game).

If a player fails to appear at his/her seat within 5 minutes of thebeginning of the round, that player will be given a game loss.

What is the Revival Bracket?

The revival bracket rule is used in the WGP, and will be used in this tournament. Commonly referred to in the west as the “diversity” top cut, we will explain how it works as follows: 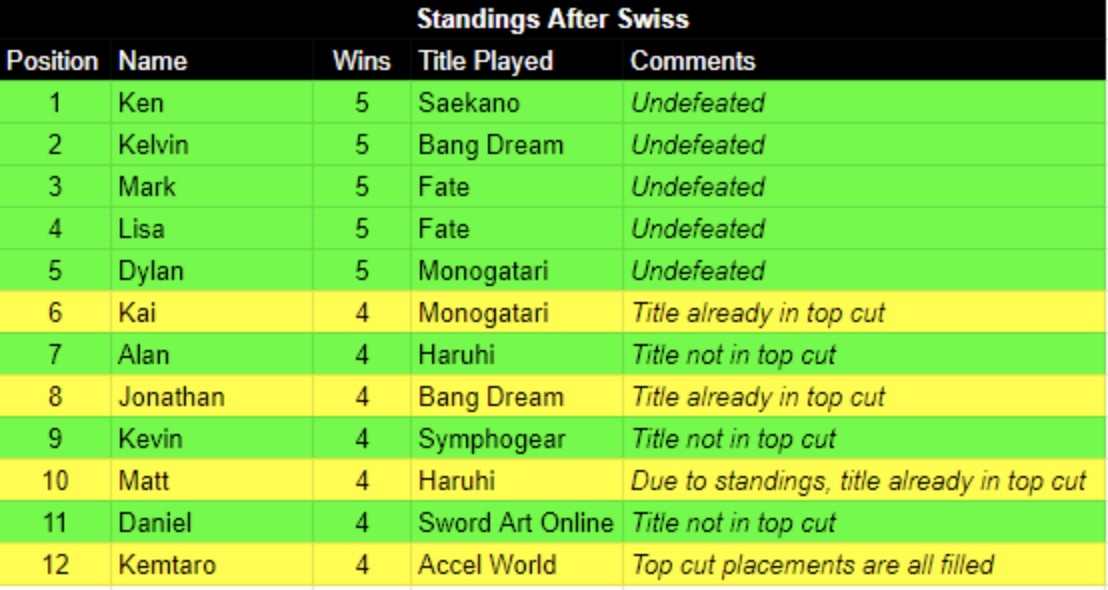 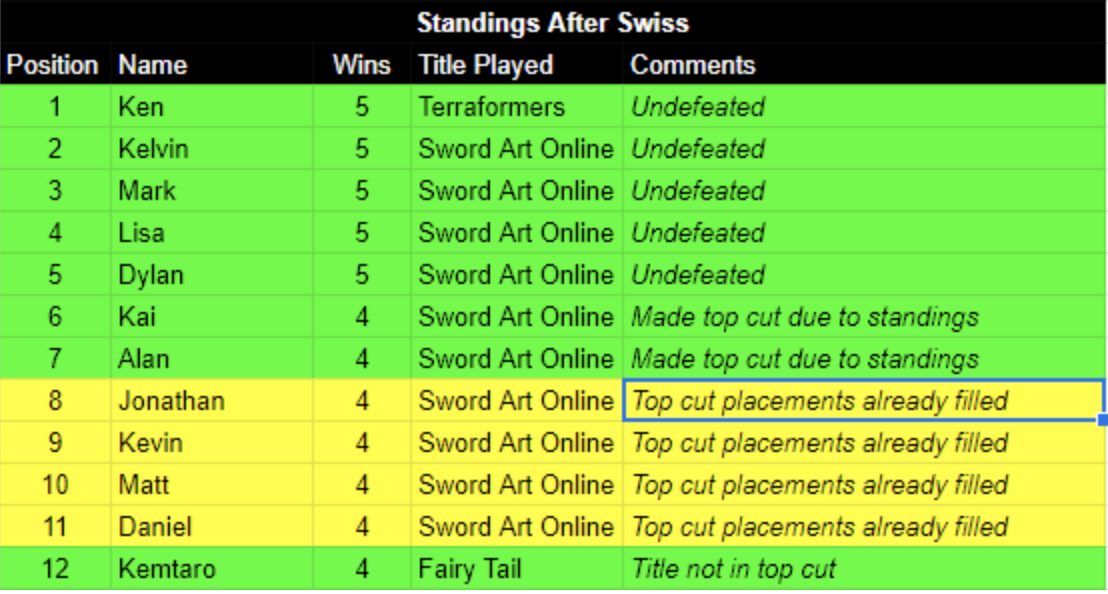 In this example, all the undefeated players make it into top cut. However, although Kemtaro is the last person in standings with a 1 loss record, he makes it into top cut as he is the only player who is not playing Sword Art Online. Then going by standing order, Kai and Alan make it in top cut as they are the highest ranked players with a 1 loss record playing Sword Art Online.

Yu-Gi-Oh is back at SMASH! with more tournaments!

When Time is called, the turn player must end their current Phase (ie. Main Phase 1) and whomever has the highest LP will win that game. If LP are tied then it’s a draw.

Only cards from the same Starter, Structure, and Preconstructed Decks can be used. No using multiple copies of the one deck, whatever is inside your deck box is what you’ll be playing with.

When Time is called, the turn player must end their current Phase (ie. Main Phase 1) and whomever has the highest LP will win that game. If LP are tied then it’s a draw.